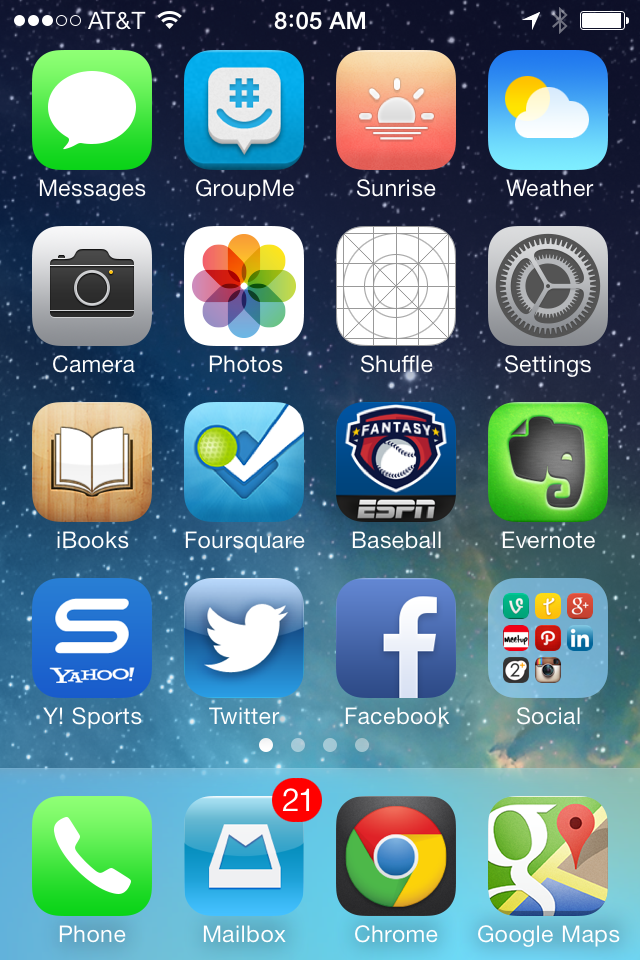 I was talking with a smart dude yesterday who told me that people are very lazy when it comes to choosing what tool to use to accomplish a given task. They’ll generally opt to use what they’re comfortable with, and what’s immediately available to them, rather than using just a little bit of extra effort to find the more reasonable tool for the job.

In the case of iOS this manifests itself in users choosing to use the app that is sitting on their homescreen instead of scrolling to a separate screen, opening a folder, and choosing the app that will make their life easier. And going one step further than the homescreen, you would assume that users would be obsessive about what apps they give space to on their dock – the four apps that sit anchored to the bottom of every screen.

But while I’ve anecdotally observed that people are decent about organizing their homescreen, I’ve found that either out of laziness, forgetfulness, or naivety, users are less likely to organize the shortcuts in their docks. I myself took two weeks after upgrading to iOS 7 to realize that I don’t even use the baked in Music app very often, yet I was dedicating one of my four shortcuts to it.

This morning I gave some thought to what I was using frequently, and what I needed access to quickly, and did a little dock reorganization. Out was Music, and in was Google Maps – which I need quick access to sometimes if I’m sitting at a red light, or stuck in traffic. Swapping out Mail for Mailbox is something I did on day one. And Chrome for Safari is an improvement for me because I appreciate sync with my desktop browser within Chrome. I thought about iBooks, as one of the most frequently used apps on my phone, but I don’t think I ever need lightning quick access to it. Camera would be another likely candidate.

Anybody using any “dock hacks” out there? Any outside of the box apps or tricks which are invaluable to have quick easy access to from every screen?