Last Thursday over at Hyperpublic we launched The Hyperpublic Developer Challenge. It consisted of two programming problems, one of easy/medium difficulty, and one which was slightly harder. We built it for fun, because we’re developers, and we love when there’s a fun problem around to work on if we get bored or need a distraction. The response to the challenge was phenomenal. We had thousands of developers from around the world working on the problems, and hundreds submit correct solutions. Here’s a summary of the response, the problems, the winners, and some observations. 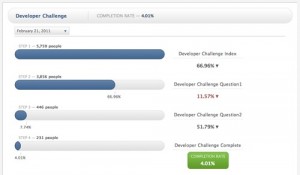 To our amazement, 5,759 people landed on our challenge start page. From there 2/3rds of them, or 3,856, were feeling brave enough to at least look at the first problem. I’m sure it didn’t hurt that we were giving away free Dropbox and Github accounts, so even the non-programmers who landed on the page at least wanted to take a look at the first problem. The response peaked out with 400+ people viewing/working on the challenge concurrently.
The first problem, summarized below, proved to be a strong filter. Only 446 people, or 11.57% of people who looked at the problem, submitted a correct response. 4,860 incorrect answers were submitted, meaning that the successful submission rate was under 10%.
Problem 2, the more challenging problem, received 231 correct submissions. This means that of the 446 people who made it through question 1, only 51.79% of people made it through problem 2. There were 753 incorrect submission attempts.
All in all, 4.01% of people who viewed the challenge made it through to completing both problems. 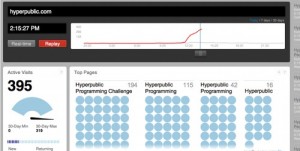 The Problems
Problem 1 asked developers to calculate the influence of fictitious users in Hyperpublic based upon the influence of the users which they have added to the system. The data was given as a text file, but it could easily be converted into a 2-D array representing which users added which other users to the system.
The most common approach was to use the input as a matrix representation of a directed graph. For each user in the input, traverse the graph recursively to sum up the number of users that the initial user was responsible for. Then find the three users with the highest scores, and use them to compute your answer to problem 1.
While we won’t be posting code examples here because we’ll leave the contest up for others to try, there are various solutions available around the internet and github, which can be found quite easily be googling/searching github.
Problem 2 assigned point values to various tasks around Hyperpublic and gave 4 users point totals. It asked the developer to compute the minimum number of tasks required in order to reach their exact point totals. This proved a bit trickier, in that many people’s first instinct was the use a greedy algorithm in which they always executed the task with the largest point total before moving on to tasks with smaller point totals. This would lead to an incorrect submission and developers to rethink their solutions.
The best way to write this program for inputs and point values of any size is using dynamic programming. This is analogous to the optimal solution coin changing problem which asks what the optimal way to make change for a given amount of money is using coins of various values. It uses a technique called memoization, where you compute the optimal ways to make change for values 1, 2, 3…up to your highest amount, and you use the previously computed values to compute the next unknown values in k attempts, where k is the number of distinct values of coins.
The other way common way in which people solved this problem efficiently was by solving 4 different linear equations. There were some one line solutions using Mathematica and Matlab linear solvers.
Fortunately, the problem size was limited enough in that a brute force solution would run quite quickly if people really got stuck as well.
The Winners
From the 231 correct submissions, we randomly selected winners of the following prizes:
Github “Medium” account free for one year – Norbert Fekete. Norbert hails from Mosonmagyarovar, Hungary, and submitted his solutions in C++. He’s new to github, so follow him over there and suggest some repos for him to fork.
Dropbox “Pro 100” account free for one year  – Brian Barthel. Brian is from Memphis, Tennessee, submitted a C# solution, and runs an independent software company called Zoasoft.
Free desk for a month for two hackers to work on their own project at Hyperpublic HQ – Martin Czygan. Martin is from Leipzig, Germany, submitted a python solution, and since he can’t take advantage of a free desk in NYC anytime soon he has graciously donated the prize to an NYC based hacker who can use it. You can find him on github and twitter.
Other Observations
The most common language that we saw in submissions was Python. We haven’t run exact numbers, but eyeballing it, Ruby, PHP, Java, and C++ were the next most common. There were submissions in a wide range of languages though including Groovy, Scala, Clojure, L, Ocaml, C, Javascript, Haskell, Matlab, Mathematica, and others. Haskell in particular was popular among people who self identified as students or researchers.
Many people who submitted commented that the problems were too easy, and they would have preferred a harder challenge. We think that judging by the number of people who made it through, the number of people who emailed for help, and the number of people who submitted incorrectly, that the difficulty was about right. The majority of responses were very positive in that they said “this was a fun way to kill an hour or two.” We wanted the problems to take only an hour or two, and as such I think we got the difficulty right. People got to brush up on their dynamic programming or linear solving, they got to construct a graph, or they got to get their hands dirty with a new language. We think people had fun.
The last thought, is that we did this for fun, and we’re glad people enjoyed it. We also wanted to meet more developers and make them aware of Hyperpublic. We’re working on structuring data around every “local object” in the world, which is a big technical problem. If you’re interested in working on this with us, or hearing more about it. Don’t hesitate to contact me.
Looking forward to the next programming challenge.

Here's a rare super-technical blog post. I spent enough time struggling with this seemingly simple problem today, that I felt I should share the answer.

The problem: You're designing a REST API for your Rails app. You want to let people insert records in your application via a POST request. However they submit their POST request via their 3rd party application, and your app throws an InvalidAuthenticityToken exception. Why is this happening?
The background: Ruby on Rails stores an authenticity token for each session, and submits this token as a hidden form field in any POST request upon a form submission. It does this to authenticate that the request is actually coming as a form submission through the web site, as opposed to a random POST request generated from CURL or another tool. A 3rd party application developer certainly doesn't have a token assigned and therefore can't submit this via their API request.
The solution: Rails only checks for the authenticity token in the case of a form submission. If you submit your data as content-type application/xml or application/json, then the token is not required. As a result you can set the content type appropriately and encode your input parameters as either xml or json. See the below gist for a ruby example.

It was hard to find this solution via google. Anyone know a smoother solution? Does the API designer generally disable forgery protection in this scenario on POST endpoints for inserting data via an API? Let me know in the comments or on twitter @petkanics

Anyone who has been hanging around Github for the past few months has heard plenty of talk about gist, gists, and gisting. My investigations at gist.github.com lead me to believe that it was just a way to paste text or code onto the web, but I still had no idea what it was for, who would see it, or how it would be accessed. Here’s an example gist:

One thing that’s become clear to me is that I’m not half the hacker that any of the Github guys are, and as such, had no idea what a gist was. Well, when they opened their new support forums, I found it to be a good opportunity to ask the experts. I quickly received a response from tekkub:

If you hang out on an IRC channel for developers, you often find need to paste large blocks of code. Doing this directly in IRC is a very bad thing…

But of course, there are other uses beyond that. Sometimes I toss handy snippets of code into gist so I can find them later if I need. It’s also great for sending error output to someone.

Well, that’s basically all there is to it. If you paste some code into their gist tool, it will format itself correctly and create a permanent URL which you can send to a collaborator or coworker. I had always just used campfire for this, but gisting seems to be the free, widely available version.

Github recently released an emacs mode for gisting as well. The above gist was created by simply highlighting the code in emacs and hitting M-x gist-region-private. It automatically created a gist at the url

and copied that URL to my clipboard. Easy as that.

Thanks for clearing this up.